Learn How the Internet Was Created In Less Than 2000 Words!

How did this massive communications network arise? The history of the Internet is a complicated story that can be dated back to the 1960s.

Here’s a simplified version of how this invention came to be.

Whats In This Article:

The official definition of the Internet is a global information system that supports communications, infrastructure, and advanced services using IP/TCP protocol.

If there’s one invention that has transformed the way we function as a society, it’s the internet. The World Wide Web lets us connect with people across the globe, conduct research on virtually any topic, and share information with billions of individuals in just seconds. It’s impacted everything from education and technology to communications and entertainment.

Considering all the services available online, it’s no surprise that the Internet is increasing in popularity–as of January 2021, there were approximately 4.66 billion Internet users.

The official definition of the Internet is a global information system that supports communications, infrastructure, and advanced services using IP/TCP protocol.

To better understand this, it’s helpful to go back in time to when the idea was first formed.

Like all great inventions, the Internet began as a concept. In 1962, a psychologist and computer scientist named J.C.R Licklider came up with the idea of a “Galactic Network.”

Similar to the modern version of the Internet, the Galactic Network concept involved a set of computers that were connected on a global-basis and allowed people to access data and information.

The first problem they faced was figuring out how to make the different computers communicate with one another.

Using a telephone line, Roberts and scholar Thomas Merrill worked together to connect a computer in Massachusetts to another computer in California.

Although he managed to achieve the first wide area network (WAN), the telephone line wasn’t adequate for the job.

Leonard Kleinrock came up with the theory of packet switching, a data transmission method that could foster communications between two separate devices.

How Does It Work?
The process involves data being broken down into separate parts (or packets). Each packet is sent on its own route, and then the different pieces are reassembled once they all reach their destination. 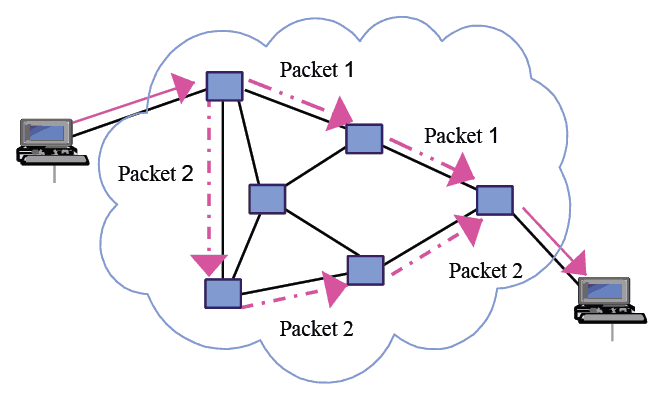 ARPANET
Using Kleinrock’s theory, Roberts crafted a plan for the first wide area network that relied on packet switching (this plan came to be known as the Advanced Research Projects Agency Network, or ARPANET).

ARPANET’s capabilities were tested in 1972 at the International Computer Communication Conference (ICCC). At this event, computer programmer Ray Tomlinson sent the first electronic mail communication to demonstrate that data could be transmitted from one computer to another.

While it was an impressive start, ARPANET was still far from the Internet we know today. Over the years, several adaptations have been made to enhance and expand its abilities and services.

One of the first steps to developing ARPANET was improving the way resources were shared between devices. More specifically, researchers wanted to incorporate time-sharing, in which several users can enjoy data or resources simultaneously.

This led to the development of two networks:

Together, these three networks became the foundation from which the Internet would develop.

Another step to enhancing ARPANET involved accommodating multiple, separate networks (also known as open architecture networking). In this concept, each individual network is designed on its own and comes with features and user requirements that are unique to its environment.

To quote:
“Open architecture…describes the structure of the Internet, which is built on standard interfaces, protocols, a basic data format, and a uniform identifier or addressing mechanism. All the information needed regarding the interconnection aspects is publicly available.“
https://www.circleid.com/

To meet these needs, electrical engineer Bob Kahn developed a protocol that became pivotal to the creation of the Internet: the TCP (Transmission Control Protocol) and IP (Internet Protocol) suite.

TCP/IP, which is currently used by the Internet for data transmission, is a more advanced version of NCP. It ensures the error-free delivery of packets from a source to a destination.

In the early stages, TCP and IP were organized into two separate functions:

For applications that did not want to use TCP, an alternative was developed. Known as User Datagram Protocol (UDP), it offered access to IP services and focused on “best effort delivery.”

A major concern that arose was adapting TCP protocols to different computers. A research group at MIT developed a more compact, simplified version of the TCP protocol that could work with smaller desktop computers. Tailoring TCP to meet the unique needs of different machines was essential to proving that multiple computer types could access the Internet.

Another issue was applying TCP protocol to networks of varying sizes. Networks can be divided into three categories:

Before the 1980s, hosts were assigned numerical values that represented their addresses. However, as more hosts were added to larger networks, it became increasingly difficult to remember these addresses–thus, the Domain Name System (DNS) was born.

The growth of the Internet also posed a problem for routers, which are devices that connect computers to Internet networks.

While these new protocols and changes revolutionized the way data was transmitted between machines, they were just the first steps to evolving what would eventually become known as the Internet.

One of the key characteristics of the Internet is its ability to adapt to new times and needs. From search engines to commercial websites, there’s no shortage of convenient amenities that can be found online. Of course, this technology would never have grown had it not been for the collaboration and ideas of engineers and researchers.

To facilitate the transfer of ideas, computer scientist Stephen Crocker established a series of memos called “Request for Comments.”

Many of the ideas and suggestions are technologies that we enjoy currently, such as:

The Internet Activities Board

As the Internet grew, the need to coordinate these different mechanisms grew with it. The IAB, or the Internet Activities Board (now known as the Internet Architecture Board) was created to oversee different Internet activities, review protocols, and help ensure that the Internet remained a safe platform that didn’t violate privacy or security. Of course, the Internet–and the duties of the IAB–only continued to expand. It wasn’t long before the commercial sector began capitalizing off of this unique technology.

By the late 1970s, the advanced version of ARPANET was being used by defense organizations and groups of scholars. In 1983, ARPANET made an official switch from NCP to IP/TCP, signaling the formal creation of the “Internet.” However, after all the work put into building this intricate system of networks, many people felt that it was a waste not to share it with the world. Thus, researchers began to work on implementing the Internet on a widespread scale.

An organization called the Federal Networking Council (FNC) was developed to help manage this process. It featured members of several governmental groups, including people from the Department of Defense, Department of Education, and National Science Foundation.

Ultimately, the role of the FNC was to facilitate communications between these different members and to make sure that the Internet was meeting federal goals. It also collaborated with international organizations to make the Internet accessible to researchers worldwide. Along with researchers, several commercial organizations wanted to learn more about Internet technology and utilize it for their own systems.

While network operating suites such as Netware and DECNet incorporated IP/TCP protocols into their products, there was lots of confusion about how to properly implement the technology. To resolve this, the IAB set up a workshop where vendors could learn how the protocol suites worked. This eventually evolved into the Interop trade show, an event where vendors learn more about Internet technology and researchers listen to concerns and questions.

Originally, these meetings hosted a few hundred people that were brought by the government or scholars. Now, there are over one thousand attendees from different commercial sectors. It’s no longer just vendors selling network operation suites and basic Internet services–it’s people promoting new browsers, search engines, and communication platforms. The commercialization of the Internet has contributed to a need for greater network management.

As networks grew, researchers began experimenting with different protocols designed to manage them. Eventually, they settled on the Simple Network Management Protocol (SNMP), a system that is still in use today.

SNMP works by “speaking” to a network–it sends out messages, or protocol data units (PDUs), to devices that can understand and respond to this computer language. It’s used by organizations and network administrators to track data on topics such as connection speed, router errors, and website traffic.

Along with network management, researchers were concerned about general Internet safety. With the vast amount of commercial organizations incorporating Internet technology into their products and services, safety and security became a pressing matter.

Many federal regulations have been established to help ensure Internet privacy. Some of the most important laws include:

While these laws and regulations have not 100% prevented security breaches, they help make the World Wide Web a safe space by enforcing consequences for private and commercial users that misuse the Internet.

Looking Forward: The Future of the Internet

The term “Internet” wasn’t coined until 1995, when the Federal Networking Council (FNC) decided to give it a label. By this time, the web had evolved greatly from the simple system known as ARPANET. From telephone lines and Network Control Protocol to packet switching and Transmission Control Protocol, the Internet has undergone several changes in the span of a couple of decades. It’s safe to say that the Internet has made significant progress since the 1960s–and it’s not done changing.

There are many stakeholders that are economically invested in the Internet and hope to further develop it by incorporating new protocols, technologies, and services. It’s possible that, in a few decades, the Internet will be in a completely different place than it is today–only time will tell.