As of January 2021, it’s estimated that there are currently 4.66 billion active Internet users globally.

More than half of the world population is currently using the Internet.

It has been almost 12 years since aforementioned research was completed. Let’s see how the figures have changed since then. With broadband Internet services becoming more commonplace, the picture has changed significantly. People use their mobile devices more than ever before to access the Internet.

It’s expected that in 2021, 22.2 billion devices globally are going to be connected to the Internet wirelessly.

Below is a summary of this data, sorted by major demographics, according to a recent Pew Research Center report.

When it comes to age, the statistics clearly show that the biggest group of Internet users fall in the age group between 18 and 29. 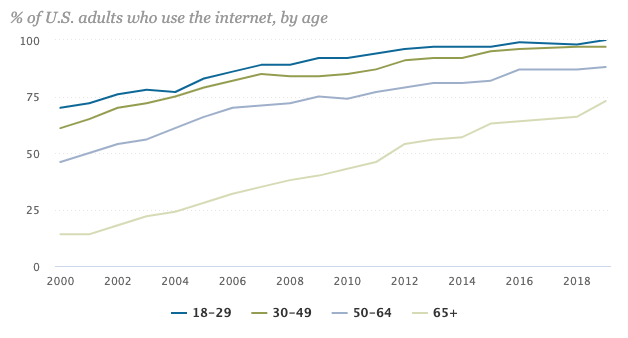 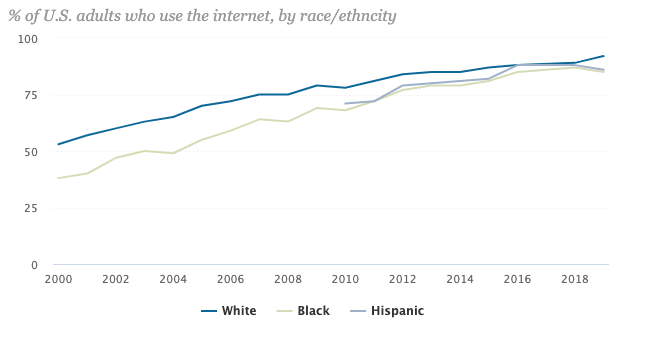 The statistics also show that both male and female adults use the Internet equally (about 90% of in both gender groups). 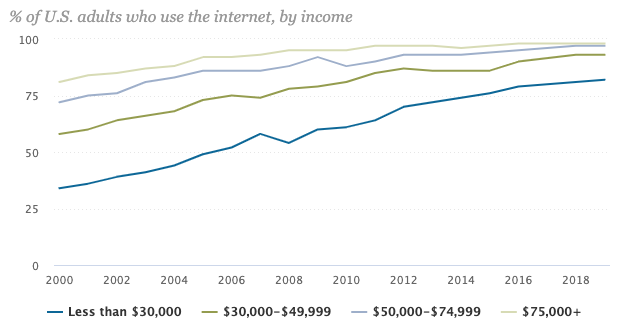 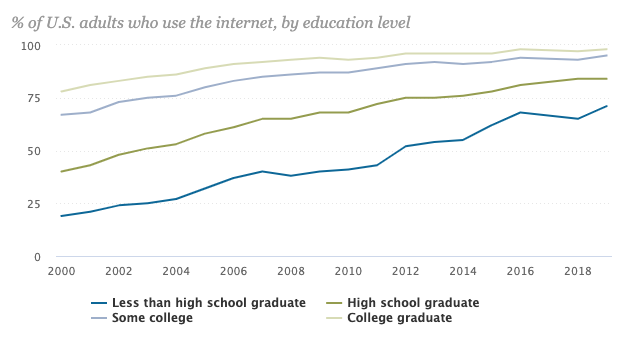 Based on the above data, we can see how Internet usage varies across different demographic groups. Similarly, the adoption of home broadband services also varies. 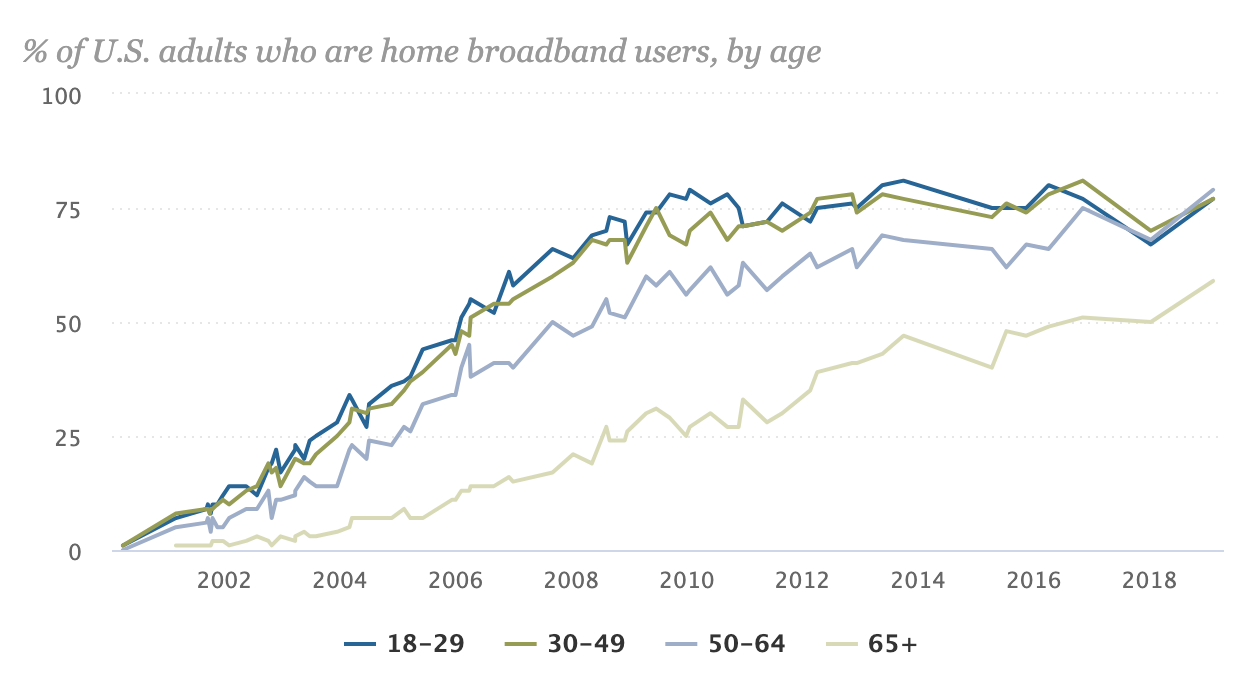 In respect of race, the statistics on home broadband services tell the same story as overall Internet usage. 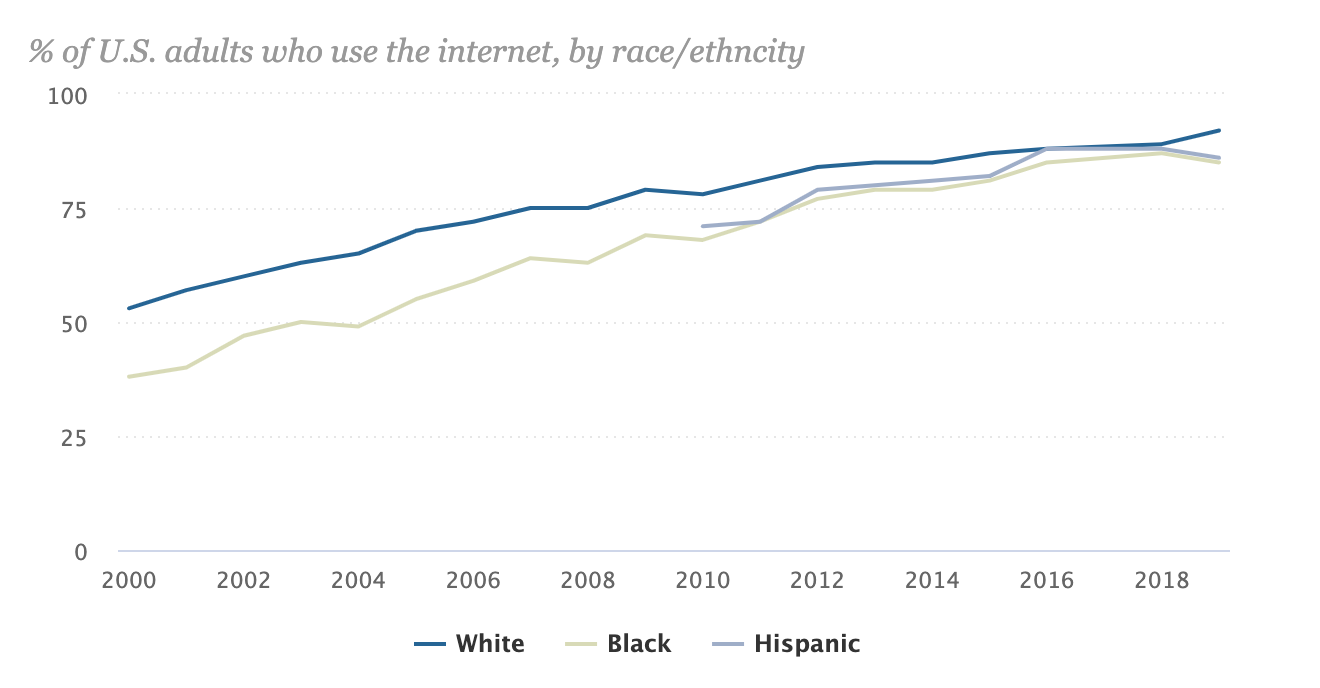 Likewise, in respect of gender these statistics are equal with 73% of both female and male adults having broadband services at home. 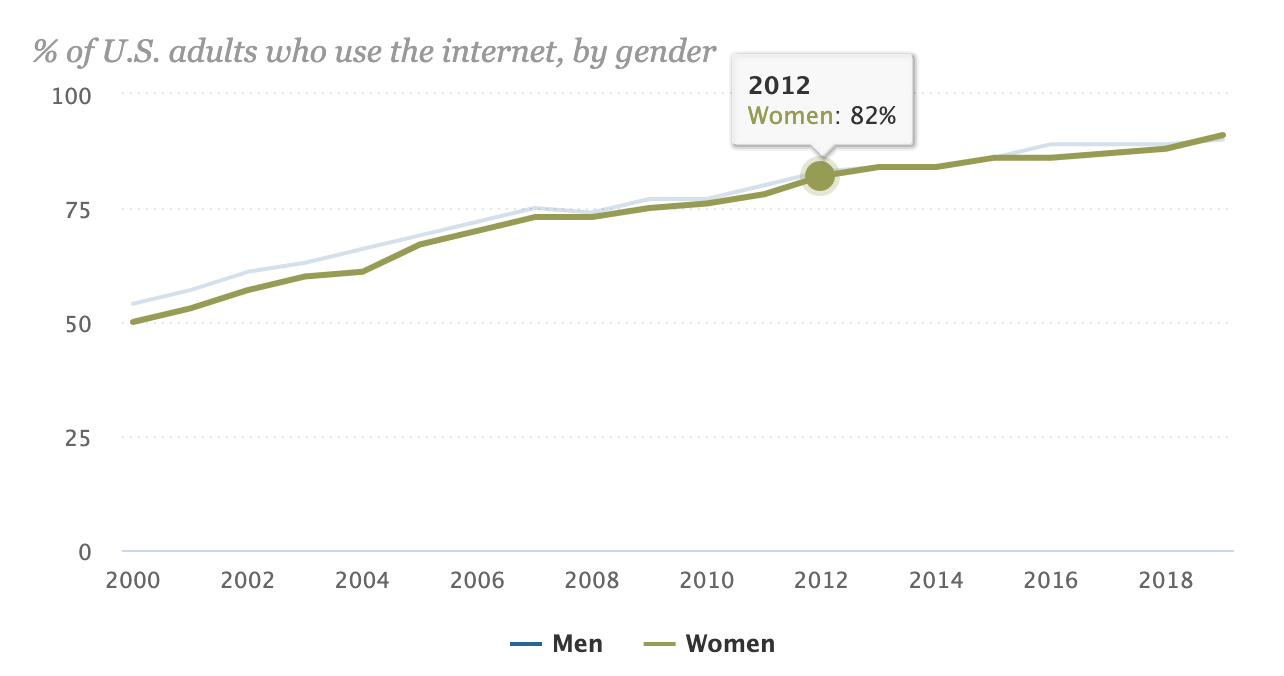 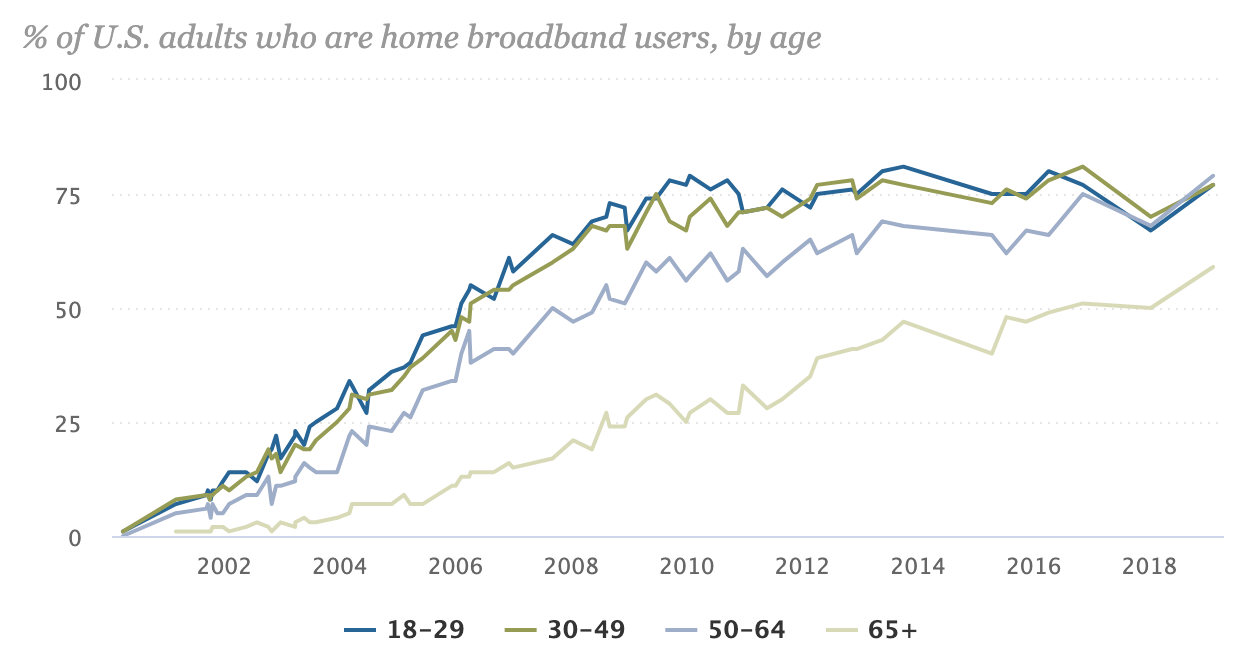 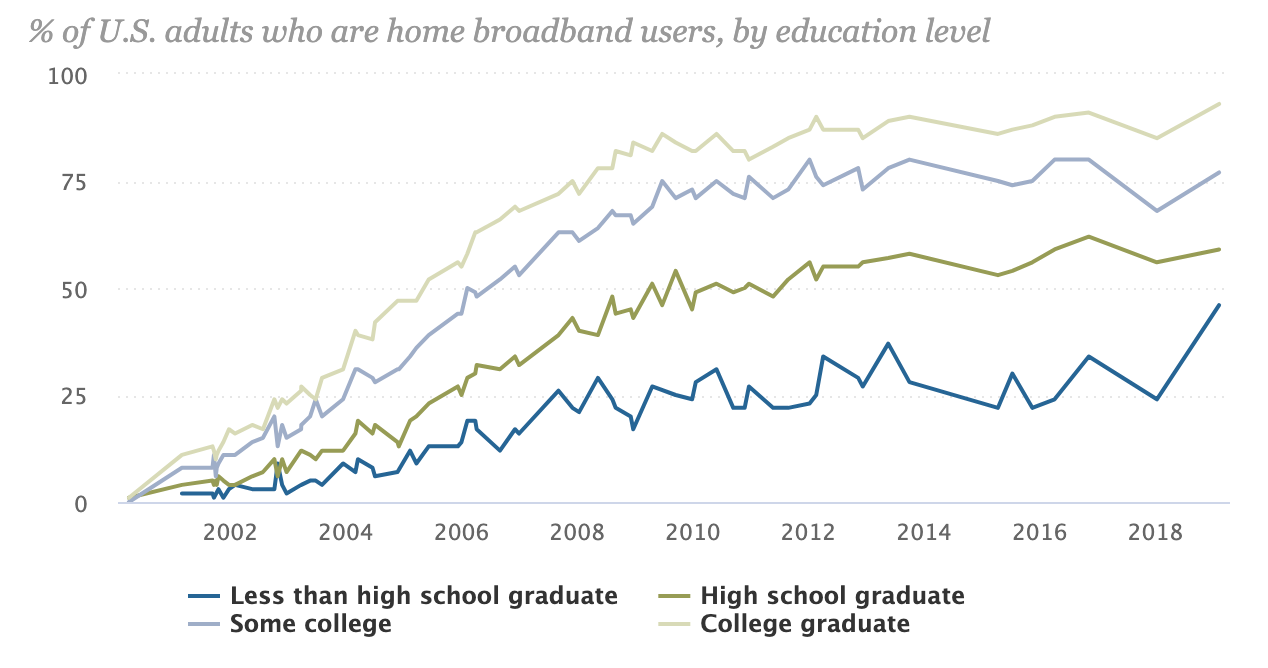 Currently 42.6% of Internet users globally use the Internet on their desktop. In the United States, 49.49% of the device market of the market favors the desktop.

These figures should be clarified because the term “desktop” includes both laptops and desktop computers. Their Internet usage differs as most laptops are used wirelessly while a substantial amount of desktop computers use wired Internet. What is important, though, is that laptop usage, even if one regards all laptops as “desktops”, is lower than mobile usage.

Currently, 50.3% of all traffic worldwide is generated on mobile devices. In the US 50.5% of Internet users currently use the Internet on their mobile devices and 63% of all US online traffic comes from smartphones and tablets.

In 2020, 274.7 million people in the United States accessed the Internet through any kind of mobile device. It’s expected that in 2023, this figure will be over 295 million. Roughly calculated, this means that about 83% of the American population uses the Internet on their mobile devices.

Here, the statistics show the converse of broadband usage, and shows that the following percentages of adults rely on smartphones for online access: 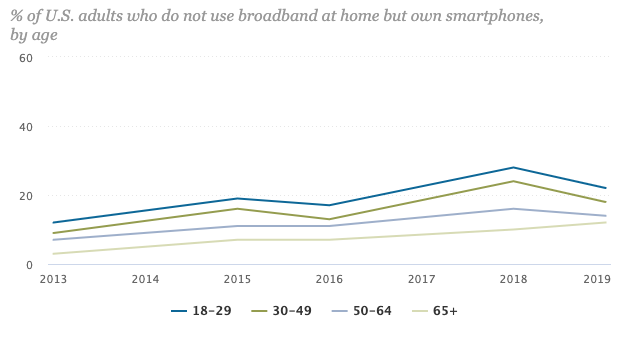 In respect of race, the statistics show that the following percentages of adults use smartphones for online access: 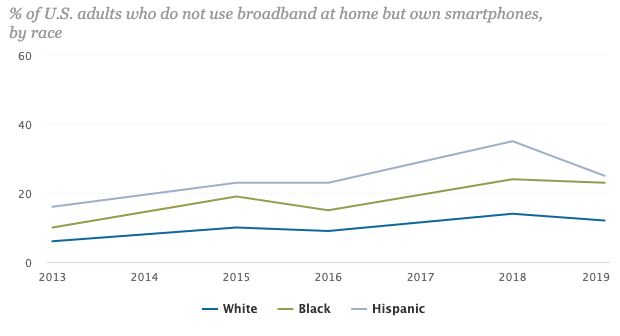 Similar to the statistics on overall Internet usage, there is about an equal split between male and female when it comes to mobile online access. Here, 17% and 16% of males and females respectively use mobile phones for Internet access. 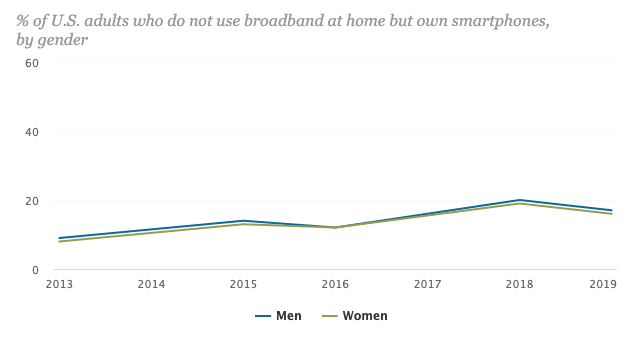 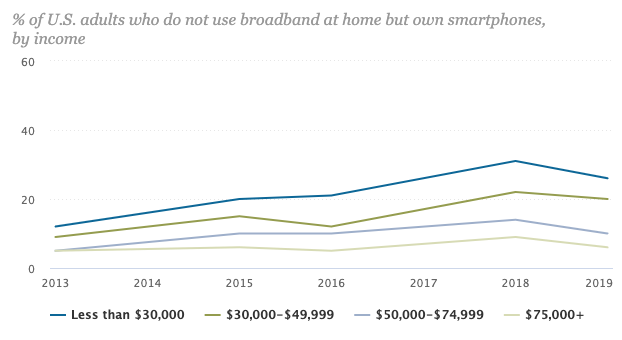 Once again, as is the case with income and race, education also shows the converse to overall Internet usage. 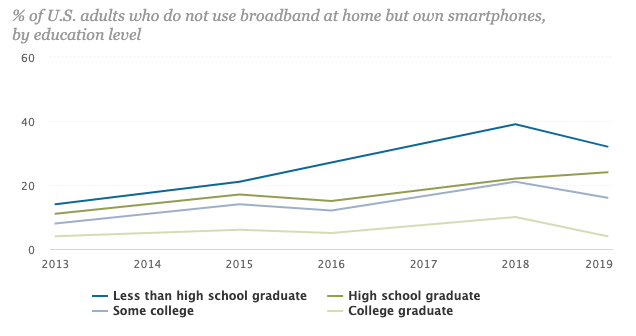 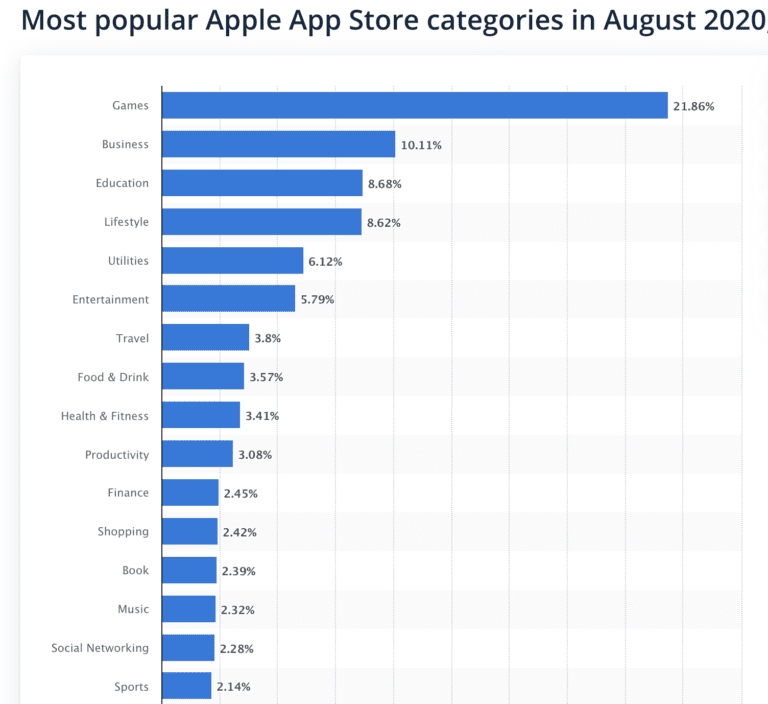 In respect of paid versus free downloads, free app downloads exceed paid app downloads by quite a margin, and it’s estimated that 98% of the revenue globally comes from the downloads of free apps.

In respect of their usage, research shows that users do the following when connected to a public Wi-Fi network:

The 2009 research focused on wireless Internet usage on either mobile devices or laptops. Times have changed, and there are now several other devices that can use wireless Internet. These include anything from smart TVs to smart watches, and connected appliances.

Internet of Things In respect of the Internet of things, it is forecast that the number of devices globally will almost triple from 8.74 billion 2020 to more than 25.4 billion devices in 2030. These devices are used in all types of industries and consumer markets, with the consumer segment currently accounting for around 60% of all connected devices and this percentage is expected to stay at this level for the next 10 years.